Awards
The GAIT Leadership Development Committee annually solicits nominations from the membership for deserving individuals of the Distinguished Service Award, the Walter S. Bell Award, and the Juanita Skelton Award, and makes recommendations for those deserving of the awards to the GAIT Board of Directors. Awards traditionally are presented during ceremonies at the annual meeting of the association.

​This award is presented to members of the association whose service to GAIT in whatever capacity is acknowledged as exemplary and worthy of special recognition. The number of these awards given during any one year is determined on an annual basis. Deadline: August 31 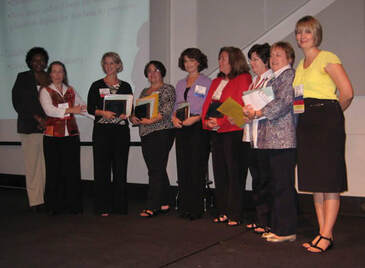 Walter S. Bell Award Program
This award is GAIT's highest recognition of achievements in the field of instructional technology from the public school sector and is presented to individuals who have made significant contributions throughout their careers. The award is named in honor of its first recipient, Walter S. Bell, former Director of Learning Resources for the Atlanta School System, who was in the forefront of developments in educational technology in the schools and whose contributions continue to have an impact on present day developments. Deadline: August 31
Past Awardees
​​Dorothy W. Blake, Frank Charles Winstead, Mary Jean Sloan, Paula P. Galland, Grace W. Burke, Gordon N. Baker, Kay D. DeFore, Deborah Hargroves, ​Juanita Buddy

Juanita Skelton Award Program
GAIT's highest recognition of achievements in higher education at the state or national level in instructional technology honors Juanita Skelton, the first recipient of the award and former head of the Educational Media Department at the University of Georgia. Dr. Skelton's contributions to the field have been the basis for many ongoing developments, and her career serves as a model for service. Recipients of the award are recognized for their distinguished careers and given Life Membership in the association. Deadline: August 31
Past Awardees
Danilo M. Baylen (2018), Phyllis Snipes (2014), Mary N. Baxter, Robert V. Dean, C. Hugh Gardner, Walter L. Brown, R. O. Coffeen, Charles E. Beard, Robert A. Harrell, Bob C. Hart, Catherine B. Price, Robert E. (Bob) Fox, Jr., Jay Harriman, Gordon Baker
Powered by